This is a very interesting and useful pattern in practice. I haven’t seen any books for classic patterns to talk about this. But I think that it should be a classic one for caching. To make it clear I think that it is an old pattern. I do not invent it and I do not discover it. I designed the solution for our problem then I realized that it should be a pattern. I just want to write it down since I didn’t know it is a pattern before designing the solution and the pattern is useful in real world. More importantly the solution was not so obvious to me before I did the work so it is worth writing it down.

First you may ask why I didn’t use Zookeeper or equivalent service. Yes that would be ideal if it is available. Sometimes it is just not available in your project but you need to solve this problem.

Take a look at the old design as below. Azure Table was used for the shared caching. It is very scalable and actually fast than many people thought (tens of milliseconds for each access). 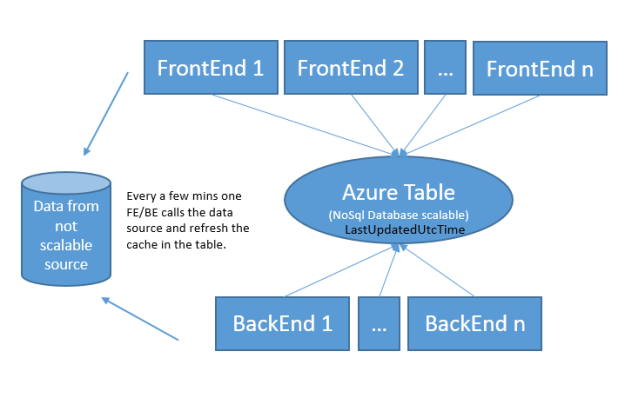 Why we need a new design

I call it two tier caching since it has two tiers now – In Memory and Azure Blob. The changes are as below 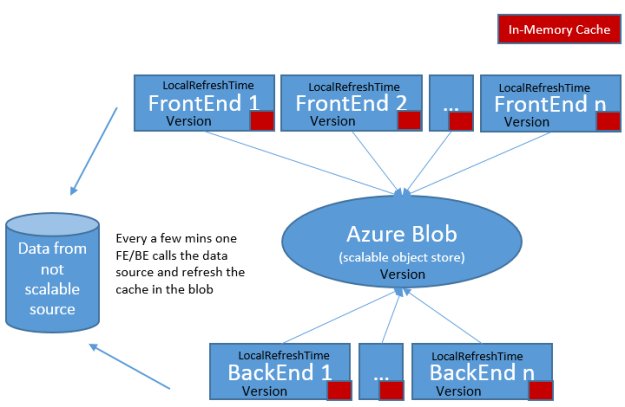 The new design solved our problem very well. The code for this pattern is not much. I left out some technical details on purpose so readers can think about them. Please try to answer the below questions.

Why is it important? First it is so important in real world. We live under so many laws which were passed by consensus. We have so many meetings and emails at work mainly to reach agreement on something. In computer world processes/machines need to agree on many things such as committing or aborting a transaction, choosing a leader, granting a lock, replicated state machine, atomic broadcast and so on. These things are often the foundation of distributed systems and critical to higher level applications and services.

I also have the below suggestions.

Consensus problem itself is easy to understand. Basically how do multiple people/parties/participants/processes/nodes/… reach agreement? Let’s look at real world examples first. You are Friend A. You and Friend B want to set a time to have dinner together. It is easy. You can just call B to confirm a time which works for both of you. However please try to answer the below questions.

Let’s add Friend C to the case. Then one person among A,B and C can be the coordinator to communicate with the other two and negotiate a time. This is more work but still easy in real life. But I can ask the same questions earlier and more questions as below

Finally let’s say that 100 friends want to set a time to have a dinner party. This may need a dedicated coordinator to do the work. The coordinator will probably need to keep a list of all people. This is even not easy in real life and the process may need a few days or even more. I will ask all the questions earlier and also more questions as below.

How do we make sure that consensus can be made in the end?

Answering all the questions will help you understand how to solve the consensus problem in computer world.A few observation about computer world as below

Let’s formalize what properties/requirements a consensus algorithm should satisfy.

The agreement property and the validity property are called safety properties and the termination property is called liveness property. If you don’t understand safety and liveness, don’t worry. I just want to mention them since they will be useful concepts in my future posts. But simply speaking safety is about what is allowed and what is not allowed or nothing ‘bad’ happens. Liveness is about something must happen or something ‘good’ eventually happen.

Now you might have a natural question. Can consensus problem be solved? In real life it is possible in most cases but it looks like that it is not possible in some cases (e.g. no peace in some places of the world due to endless war/conflicts) but you are not sure. Optimistic people may say that 20 years later the war will be over and the peace will come. The pessimistic people may say that it is doomed. But scientifically speaking is consensus possible in all cases or not?

A synchronous system has the below properties [3].

On the contrary an asynchronous system doesn’t have these properties.

Here comes another natural question. Are the real world systems synchronous or asynchronous? Just look at the properties and think about it.

Can consensus be solved in synchronous system? The good news is yes. It can be solved even if there are server crashes. I will leave how to solve it as an exercise.

Can consensus be solved in asynchronous system? Unfortunately it is proved [1] that it is not possible. The famous result and proof is called FLP impossibility result. FLP are the acronym of the three authors’ last names. This result is not trivial and it won Dijkstra Prize. The result can be expressed very simply as below. If you want to understand more please feel free to read the paper [3] which is very easy to read.

A consensus is impossible in an asynchronous system if there is even one crash failure.

If consensus can’t be solved in asynchronous system then why do we still strive to find good distributed algorithms for it? it turned out that the systems in reality are not completely asynchronous. The important algorithm Paxos can actually guarantee that consensus can be reached as long as the system is eventually asynchronous (a system model closer to real world). Simply put it works very well in reality. It looks that this post is getting long and explaining Paxos may take even more text so I will stop here and continue the talk in my next Post.

If you don’t know about Leslie Lamport you can’t really say that you know about distributed systems. A not accurate analogy is that someone who claims to know about American history doesn’t know about George Washington or Thomas Jefferson. In case you know his name but not his Bakery algorithm I will show you why this algorithm is so interesting.

He is currently working as a principal researcher in Microsoft Research Silicon Valley Lab. He is 73 at the time of writing. One reason some people who are working on distributed systems might not know about him is because people working in engineering field read papers or read the history. The more important reason is that his work is usually at the very core or very low level of distributed systems. If you are a developer you probably don’t need to know about him to understand a system or get your work done. But a lot of us are using systems which are based on his work directly or indirectly every day. e.g. part of the system behind iCloud is using the Paxos algorithm invented by him. Many Google services are using Google Big Table which relies on GFS which uses Chubby which in turn uses Paxos at its core. Microsoft Azure and Bing which power numerous services are also using Paxos.

Leslie Lamport got his BS, MS and Phd degrees on Mathematics which I think is an advantage for him when he works as a computer scientist because he can write structured proofs easily. He has a lot of humor and wisdom which you can strongly feel it from his casual comments[2] and the interview[3]. His most cited paper is “Time, Clocks, and the Ordering of Events in a Distributed System.” and it was published in 1978 and among the most cite articles in Computer Science. The famous algorithm Paxos has a colorful history since it came out of his failed attempt to prove that no such algorithm existed[3]. The paper “The Part-Time Parliament” which introduced Paxos was written by him in 1990 but only published 8 years later in 1998. This paper won an ACM SIGOPS Hall of Fame Award in 2012 [2]. You can read the details at [7]. I strongly encourage that everyone should read the two papers. One caveat. Please read “Paxos made simple” (also by Lamport) instead for the Paxos algorithm. But if you can understand “The Part-Time Parliament” well the first time you read it you are probably a genius and should stop reading my blog. Also look at the years I put in here and you will have a rough idea about the development of the theory of distributed systems.

I particularly want to talk about his bakery algorithm for the below reasons.

The Bakery algorithm was introduced in his paper [5] in 1974. The analogy is very simple. Let’s say there is a bakery with a numbering machine at its entrance. Each customer needs to take a number which is unique. At any time only one customer can be served and that customer has the smallest number. In real life this is easy to understand it works perfectly. In computer world please think about the below problems.

I encourage everyone to read this paper (just 3 pages. Actually 2 pages with proper formatting).There are three sections in this paper: the problem, the solution and the proof. It is fun to read. The code is easy to understand. The proof might not be easy or interesting for most readers but you can just assume that it is right.

If you want to read code in java you can read the Wikipedia page [6]. Unfortunately the Java code on the Wikipedia is wrong. I didn’t bother to fix the Wikipedia because I want my readers to know what is wrong. The highlighted part is wrong and it should be entering.get(i) != 0. Otherwise the algorithm would lose the remarkable property that read and write can overlap.

[3] A Discussion with Leslie Lamport by Dejan Milojicic http://research.microsoft.com/en-us/um/people/lamport/pubs/ds-interview.pdf

It turned out with no surprise that distributed systems are pretty complicated and the learning curve is steep. It really takes time and effort to understand the fundamentals and the real production distributed systems. I always believe that sharing my learning experience will help people who want to learn and also help me learn more. This is why I want to write blogs regularly to share my experience.

In the end people who follow on my blog should have a very good understanding of distributed systems and cloud computing. It should be helpful for job interviews, your projects at work, your curiosity about technologies and many other more cases.